Grupo Axé Capoeira has performed worldwide since its conception in Brazil, making its Canadian debut at the Vancouver International Children’s Festival in 1990. Featuring traditional capoeira music as well as upbeat Brazilian vocals and instrumentals, performances showcase professional capoeiristas and dancers at the height of their skill. With exciting choreographed dances, internationally acclaimed capoeira, high-flying acrobatics, invigorating music and dazzling costumes, Axé Capoeira performances have enthralled audiences of all ages and sizes in thousands of schools, festivals, and theatres across the globe.

Axé Capoeira performs at a variety of different events from small private functions to major corporate galas. Our performances range from 5 minutes to 45+ minutes in length. Shows can be arranged as a family oriented, educational show suited for elementary schools or an entertaining and electrifying show suited for nightclubs, weddings and festivals.

Our talented group of performers consists of highly trained professionals who are accomplished & experienced. We are available to perform SOLO, DUET or GROUP acts at your next special event! 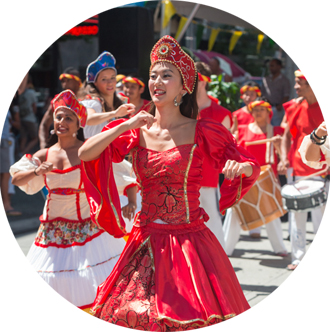 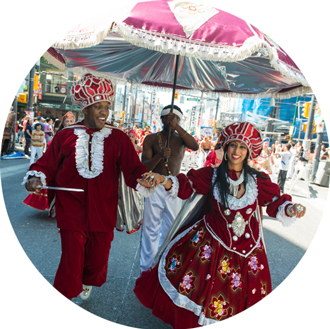 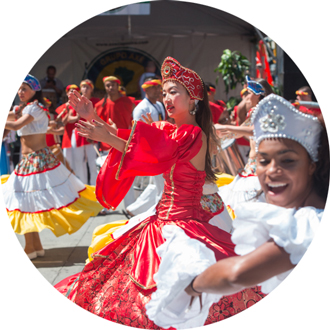 MARACATU (mah-rah-kah-too) consists of a powerful, heavy rhythm accompanying a courtly procession representing coronation festivities surrounding the Congolese King and Queen in Brazil, who were elected by the Congolese people and served as symbolic figureheads with no real power. In addition to the royal entourage, the dance features a cast of traditional Afro-Brazilian goddesses, with divine costumes and choreography to match. 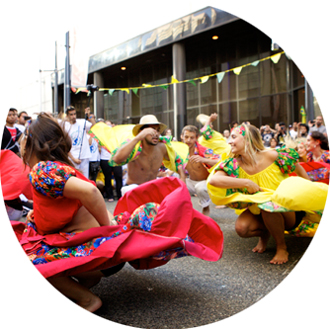 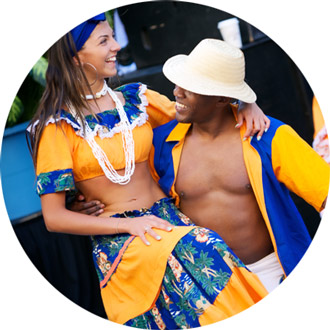 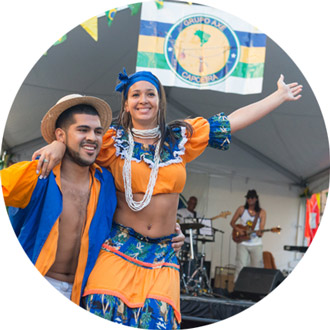 COCO DE RODA(kokoo-dee-ho-dah) is a typical dance from the beach regions of northeastern Brazil. Exhilarating vocals accompany colourful choreography based on steps and movements traditional to the indigenous Tupi people of Brazil. With a strong African drumming influence, the music primarily features a bass drum, snare drum, and tambourine. 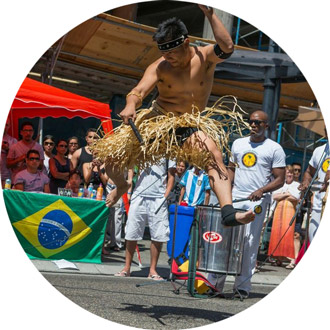 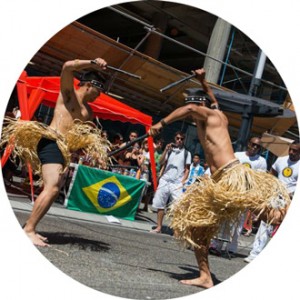 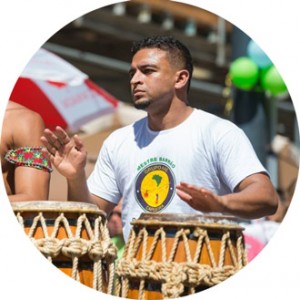 MACULELÊ(mah-coo-leh-leh) is an explosive Afro-Brazilian warrior dance created by African slave workers on the sugarcane plantations in Northeast Brazil. The dance’s choreography and music is based on the movements and drum rhythms that emerged during harvest seasons, in which slaves used machetes to harvest the sugarcane. Though the dance may feature real machetes, sticks are often used it has become tradition to use sticks in place of machetes. 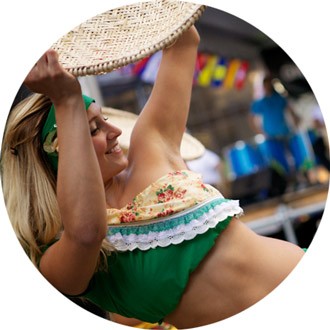 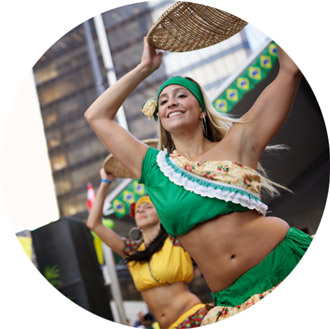 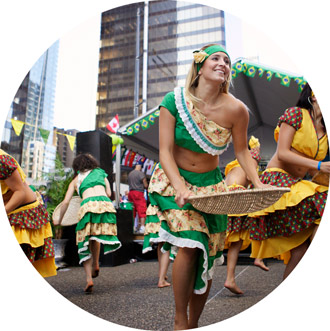 COLHEITA(col-i-heta), portrayed entirely by women, is a traditional dance representing the annual bean harvest in rural Brazil. Colourful and flowing traditional skirts punctuate the dancer’s movements as they swing woven baskets to the music, symbolizing the collecting and sifting of beans. 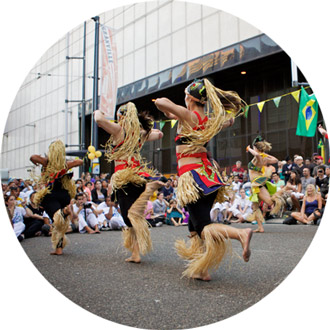 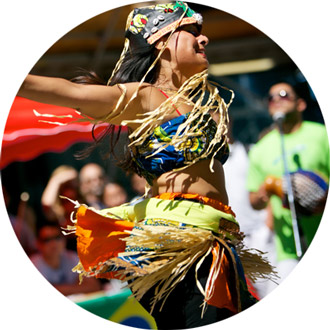 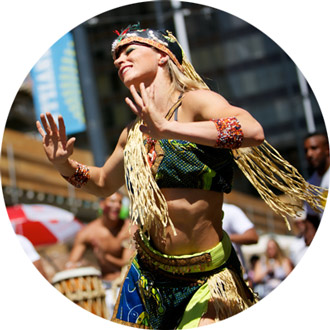 AFRO(a-fro) originated among the slaves of Brazil’s colonial era. Its vitality comes from the mixture of steps and rhythms comprising a combination of African, Indigenous, and European influences. Rapid, free,and independent movement of the arms, chest, head, hips, and feet characteristically emphasize the dance’s rhythmical richness and mesmerizing energy. 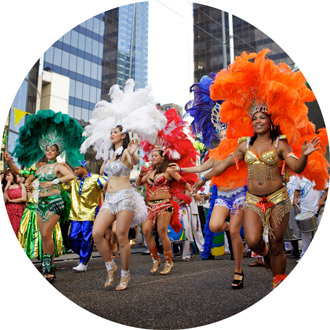 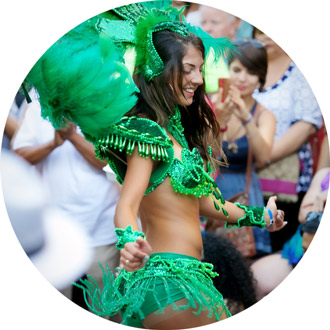 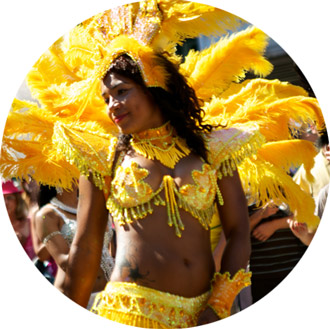 SAMBA(sahm-bah) is one of the most popular and well-known dances from Brazil. Featuring a highly contagious rhythm, samba is usually seen during Carnaval and Mardi Gras celebrations around the world.

SAMBA DE RODA(sahm-bah-dee-ho-dah) is a traditional Brazilian dance from North East Brazil. This dance spread to other parts of Brazil where it became base for the development of the modern Samba. Dancers performing the dance form a circle or “roda” and take turns by dancing in the circle. Those in the circle accompany by clapping their hands and singing.


SAMBA-REGGAE(sahm-bah heg-gay) has given rise to a style of African-influenced dance derived from Afro-Brazilian dance moves. In a social setting, samba-reggae dances tend to be done in a follow-theleader fashion, with a few skilled dancers initiating moves in a line in front of the crowd, and the whole crowd then following along. In addition, samba-reggae drummers often dance while they drum. 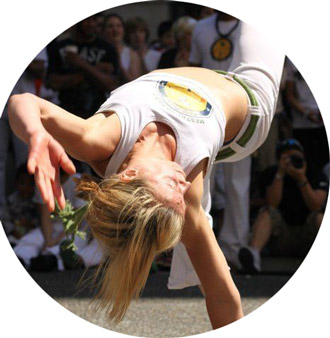 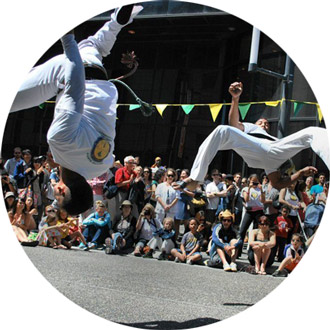 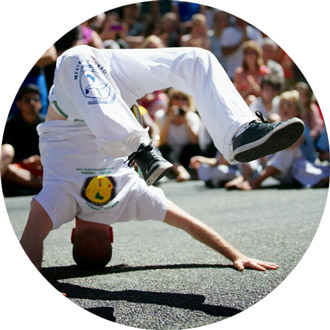 CAPOEIRA The capoeira portion of our shows consists of solo acrobatic numbers as well as a demonstration of how the capoeira game is played in context. Prepare to be ‘wowed’!